Last fall a petition was filed to prohibit the use of dogs on bear hunts. The petition claimed that the “use of hunting dogs is a cruel and inhumane method.” Advocates for the petition also believe that dogs give the hunter an unfair advantage and that the practice is detrimental to the bear population.

While the conversation was spirited on both sides of the aisle, the Nevada Board of Wildlife voted five to two against changing the language in NAC 503.147, the Nevada Department of Wildlife regulation around hunting with a dog.

NDOW held its March Wildlife Commission Meeting on Friday, March 19, 2021, and Saturday, March 20, 2021. Friday’s meeting which included the conversation around hunting bears with hounds can be watched in its entirety here: https://www.youtube.com/watch?v=67ewcyVjgCU&t=15s. The conversation around bear hunting (item 10B) starts at 4:45:00.

During the meeting, seven members of the Wildlife Commission and three NDOW employees discussed the use of hunting bears with dogs. Game Division Administrator Mike Scott gave a presentation on the Use of Hounds on Bear Hunts. Here are some takeaways:

The report goes into detail about the sex, weight, age, and method of the harvest of bears in Nevada. It also outlines details about bear hunting laws in the 32 other states across the U.S. that allow bear hunting. 19 of those states (61%) allow hunting bears with dogs.

Nevada is considered an intermountain west state, and one of 11 that allow bear hunting. NDOW has studied the bear population that live along the Eastern Sierra Mountain range and has found that the number of bears has been steadily increasing since 1995.

After the presentation by Mr. Scott, the commission opened the Zoom call to the public for comments. While some made emotional arguments about how hunting bears with hounds induces unnecessary stress on all animals involved and is cruel, inhumane, and not in the best interest of Nevadans, it was Dr. John Keehner, carnivore ecologist studying mountain lions in Washington state, that made it clear that unscientific petitions like the one in question are “concerning.”

Dr. Keehner made some excellent points that when anyone is referring to “stress in animals” they are referring to a study done with hounds chasing red deer, an herbivore and prey animal. He goes on to remind everyone that bears and mountain lions have been chased by wolves for millennia; hunting them with hounds likely does not affect them differently.

Another impactful commenter included veteran houndsman, Mitch Bailey, owner and operator of Nevada Hunting Services. He made the point that when Nevada started allowing fair chase bear hunting he and his guides wanted to start the practice off right. He stressed that when a bear is taken, the meat is consumed. He also stated that no bear has ever been harmed and gotten away, which is because of hounds. That’s because hounds allow the hunter to get close enough for a clean shot, reducing the risk of injuring the bear and letting it run off.

After the commission heard public comments, they revisited some of the issues brought up by the backers of the petition, namely that hunting bears with hounds leads to the separation between sow and cubs, and that it leads to high stress levels in bears. Members of NDOW confirmed that there wasn’t much data on the physiological effect on bears but it didn’t seem to negatively affect population numbers.

They also discredited the myth that hounds separate sows from cubs. In the history of bear hunting in Nevada, NDOW only had one female bear harvest report that was still lactating. However, bears can lactate long after the cubs have left her side. The female bear in question did not have hair around the nipples, which indicates that cubs are still nursing.

NDOW also confirmed that the majority of bear hunters do consume the meat. In fact, only a single hunter in the past three years reported leaving the meat after the kill and only taking the hide and skull. The other 43 fulfilled bear tags over the past three years were taken out of the field and presumed to be consumed.

Carnivore management is something that wildlife departments take very seriously in order to monitor the population and in turn, carnivore and human interaction. Hunting bears with hounds is the most effective, and frankly the most ethical, way of keeping the population under control.

Hunting bears with hounds allows the hunter to see the bear clearly once the hounds tree their quarry. The hunter can then determine the sex and age of the bear before taking it which means there is no guessing game from the hunter viewing the bear through a scope.

Hounds allow the hunter to be selective, to choose the biggest, oldest bears, and to more often choose males. This is more beneficial than spot and stalk methods which often lead to shooting bears from farther away.

Hound hunters do not use their dogs to make the chase unfair. They are passionate about their sport and care about their hounds. Training hounds to hunt and pursue predators is no easy feat and takes serious dedication. Plus, hounds have been bred to hunt. They are instinctually hard-wired to pursue and are happiest and healthiest when they are doing what they love. While bear hunting is essentially a pursuit of game, it is ultimately about carnivore management and seeing the bear population flourish and stay wild.

The Nevada Sporting Dog Alliance is a strong advocate for hunting with dogs. Not only are dogs useful to flush and tree quarry from pheasant to bear, but they also have a long and traditional history of hunting alongside their owners. Heritage is vital to our sport and dogs have been a part of hunting traditions for a long time. The Alliance represents sporting dog owners at the legislative level, attends hearings, and strives to educate the public about hunting with dogs.

The Nevada Chapter of Backcountry Hunters and Anglers (NVBHA) are also strong proponents of hunting with dogs. As a grassroots group, they are sportsmen and women hoping to protect Nevada’s public lands, hunting traditions, and wild spaces.

Prime Revolution takes hunting with dogs very seriously. It is hard work to train a dog to help a hunter and takes some serious dedication. Conner Capurro from Prime Revolution recently went on his first bear hunt with hounds and he can tell you first-hand it was not easy! 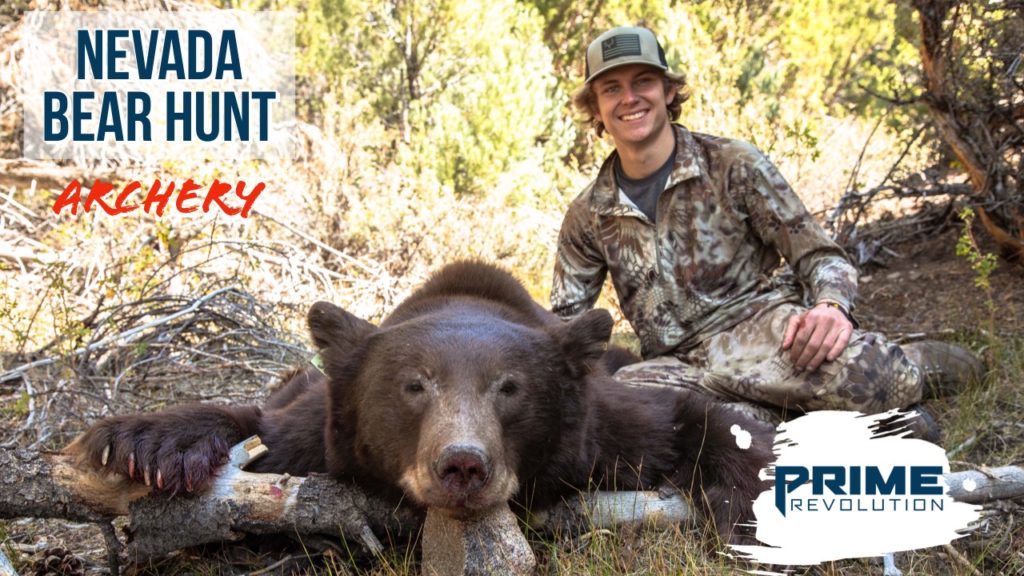 We appreciate the Nevada Wildlife Commission and NDOW for hearing public comments about hunting bears with hounds and voting against changing the language in regulation NAC 503.147.